In 2013 the Chinese government announced a battle against air pollution and started implementation of rigorous policies to reduce emission of atmospheric suspended particulate matter. For the past five years PM 2.5 concentration in east China dropped by nearly 40 per cent. This, however, has brought an unexpected side effect.

The number of air quality monitoring stations deployed all over the country has reached nearly 1,000, and they are collecting unprecedented volumes of data. When analysing the collected figures, researchers from John A. Paulson School of Engineering and Applied Sciences (SEAS) and Nanjing University of Information Science & Technology (NUIST) came to surprising conclusions. They discovered that when PM 2.5 concentration drops, the ozone concentration levels are increasing.

Ozone is an allotrope of oxygen. An oxygen particle contains two atoms, and an ozone particle contains three oxygen atoms. It resides in the upper layers of the Earth’s atmosphere, where it plays a very useful role – though its concentration is extraordinarily low, it absorbs a vast portion of ultraviolet (UV) radiation from the Sun.

Ozone is a very responsive and powerful oxidant. It is very harmful to living organisms as it easily reacts with organic elements and decomposes to form plain oxygen. This feature of ozone is used for disinfecting water, which is its primary application.

Civilization, however, has created a new mechanism for generating ozone, which is a component of the photochemical smog, also referred to as Los Angeles smog. This tropospheric ozone is generated in strong sunlight and high temperature. This harmful gas is a product of a number of photochemical reactions involving nitrogen oxides and hydrocarbons, which are air pollutants from transportation. This is why it is more abundant in sunny and hot big cities like Los Angeles. Ozone contained in smog was a subject of multiple studies as early as in 1950s[1].

During their research work, the scientists from SEAS and NUIST found out that the particulate matter suspended in the air intensely grasps free radicals needed for ozone generation.

„There was so much particulate matter in Chinese cities that it stunted the ozone production,” said Daniel Jacob, the Vasco McCoy Family Professor of Atmospheric Chemistry and Environmental Engineering, and co-corresponding author of the study. “However, the rapid reduction of PM 2.5 dramatically altered the chemistry of the atmosphere, leaving more radicals available to produce ozone… We haven’t observed this happening anywhere else because no other country has moved this quickly to reduce particulate matter emissions. It took China four years to do what took 30 years in the U.S.”, explained Jacob.

„As PM 2.5 levels continue to fall, ozone is going to keep getting worse,” said Ke Li, a postdoctoral fellow at SEAS and first author of the study.

” Results from this study suggest that extra efforts are needed to reduce nitrogen oxide emissions in order to stem the tide of ozone pollution,” adds Professor Hong Liao at NUIST, who is the co-corresponding author of this work[2]. 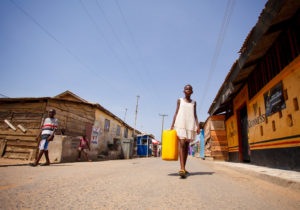 How Blockchain Can Eradicate Poverty in Third-World Countries