It is expected that by 2040 nearly 80 per cent of metropolitan means of transport will be powered by electricity. The fastest growth is expected to occur in the second half of 2020, which is due to the dropping prices of batteries and the growing scale of vehicle production.

The most recent long-term forecast of Bloomberg New Energy Finance (BNEF) indicates that the sales of electric vehicles (EV) will grow 10 times, from record 1.1m in 2017 up to 11m in 2025, and afterwards, up to 30m in 2030. The biggest portion of this growth will be contributed by China, where a half of world’s electric vehicles are sold today. Many Chinese metropolises are planning to electrify their entire bus transportation systems. 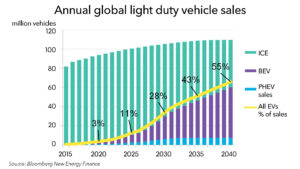 The sales of new internal combustion vehicles are anticipated to start dropping in mid 2020s, while the increasing demand for electric buses will grow even faster than for passenger cars. It is worth noting that already today there are over 300,000 e-buses in China.

Poland, too, is experiencing the trend towards electromobility, particularly in the area of metropolitan transportation. Rafako has recently premiered its first, utterly Polish-made e-bus model and thus joined the race for electrification of collective transportation. What’s worth noticing in this design is that the battery of this bus may be charged up to 90% of its capacity within nearly 15 minutes. Multiple innovative solutions, such as a battery mounted in the chassis, not on the roof, or a permanent magnet synchronous motor, lead to a conclusion that Rafako may have a significant contribution to the dynamics of Poland’s e-bus market development.

Demand for electricity to grow by 6 per cent

Colin McKerracher, chief analyst for advanced transportation of Bloomberg New Energy Finance (BNEF) estimates that “Changes which occurred for the past 12 months, such as plans of e-bus manufacturers and air pollution regulations strengthened our view on the prospects of electric vehicle development…. We now believe that in 2040 electric vehicles will constitute 55 per cent of light-duty cargo vehicles and 33 per cent of world’s total car fleet”.