German architect Andre Broessel is convinced he has found a solution that will “squeeze more juice out of the sun” even during the night hours and in low-light regions.

His company Rawlemon, created a prototype of a spherical sun power generator called the beta.ray. The technology uses a spherical lens for focusing sunlight rays. The light enters the working area, the position of which is controlled by a dedicated mechanism, tracking the movement of the Sun. The futuristic design is combined with an extensive functionality. The power generator can work anywhere with access to a sufficiently big piece of sky. 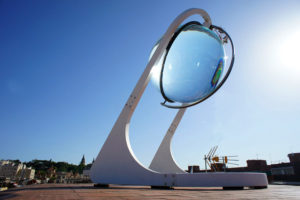 Beta.ray has a hybrid collector to simultaneously produce electricity and heat. With the light focused in a spherical lens, the size of the silicon cell may be four times smaller with the equivalent output power. Taking into account heat generation, the entire device operates at an efficiency of 57 per cent. The collected heat may be used in a number of ways – to heat buildings or water or to generate electricity in a generator system combined with a Stirling engine, which needs nothing but heat to operate. The PV panel may be replaced with a set of LEDs converting the device into a gigantic lamp.

The generator may operate both as a component in a power network and as a standalone device, outside the network. It may be supplemented with a battery to accumulate power surpluses.[1]. 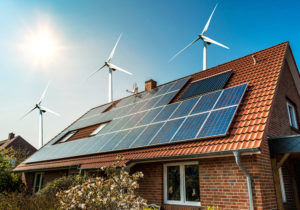