Google could bring us back in time with green energy

Google started its journey towards renewable energy sources in 2010 by signing the first PPA (Power Purchase Agreement) with a 114 MW power plant in the state of Iowa. 8 years later the company announced it already converted to 100 per cent power from renewable energy sources all over the world, including data centres and offices. This means that Google for each consumed kilowatt hour of electricity, purchased one kilowatt hour of renewable energy from a wind or solar farm. In this way Google has become world’s largest corporate buyer of renewable energy, whose obligations for the purchase of wind and solar power reach 2.6 gigawatts (2,600 megawatts). As the company itself jokingly mentions on its web site, it is over twice as much as 1.21 gigawatts – the power required for bringing Marty McFly, the main character of a popular movie “Back to the Future” (1985) back in timeI)https://environment.google/projects/announcement-100/.

Server facilities underwater and in the polar circle

On the other hand, since 2014 Microsoft has been carrying out the Natick project – underwater data centres. Databases are placed in special capsules deployed at the bottom of an ocean. They emit minimal heat amounts in the water reservoir compared to a traditional server room and water ensures a cooling system without generating any extra costs. They are also made of recycled materials and once the data centre stops functioning, it is also recycled. In the future, underwater data centres could also be powered by renewable energy sources, for instance, by tidal power generators or underwater turbine power. This is a visionary step by the Redmond giant towards increasing the use of green energy if we consider that traditional data centres consume gigantic amounts of electricity, largely generated to ensure effective cooling of the same data centre. According to Green House Data reportII)https://www.crn.pl/artykuly/raporty-i-analizy/wiatr-odnowy-w-sferze-zasilania-dc, all data centres all over the world use 30 GW of energy a year and process over 1.8 zettabyte of data. This is about 1.4 per cent of the world use of power. This is an amount that could power all households in Italy for 12 months.

A similar approach was very likely to have been followed by Facebook, which in 2013 built one of its data centres not in the United States but in a small town of Lulea, in the north of Sweden, very close to the polar circle. Therefore, the centre uses renewable hydropower – it is 100 per cent powered by “green power” from a water power plant on a nearby river Lule and naturally present cold air used for cooling and air conditioning. In the winter temperature drops down even to minus forty degrees Celsius. It is the use of renewable energy and outdoor air cooling as well as the most sophisticated technological solutions that makes the power use effectiveness (PUE) for the Lulea data centre revolve around 1.05–1.09. This means that nearly each watt of power used in the centre is used for powering servers and computers. This is a very good result if one considers that most data centres of this type have PUE values of at least 1.5 or more, because electricity is also used for powering air condition or other auxiliary systemsIII)https://www.spidersweb.pl/2017/06/lulea-facebook-centrum-danych.html. These are the green-friendly conditions in which the social media giant stores photos, posts, comments, private messages or likes.

These are only a few interesting examples, but undoubtedly “green energy turned out really good in a job interview” in the world of leading market players. 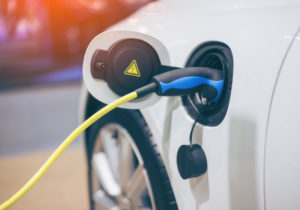 The Polish market of electric cars is developing very rapidly