Streaming and watching movies online generates 300 million tonnes of carbon dioxide a year. Sending tens of emails a day, WhatsApp calls, uploading images to the cloud, watching a short clip on YouTube are only tiny bits of our everyday digital lives. However, very few realize that all that affects the entire natural environment. Though aviation’s contribution to global carbon emissions is estimated at about 2.5 per cent, the global data transfer and the corresponding infrastructure – as much as 4 per cent. Uploading data into the cloud may not only generate savings of nearly 40 per cent, but first of all, help the environment.

“Internet contributes to global warming because it generates lots of carbon dioxide. More than 2 per cent of global emission is generated by the Internet. We might not even fully realize how much energy our everyday use of the Internet demands. A simple operation in an internet browser generates 7 grams of carbon dioxide and sending an email with an attachment – up to 50 grams,” lists Marcin Zmaczyński, marketing director Central and Eastern Europe in Aruba Cloud, tells Newseria Innowacje news agency.

According to the most recent studies conducted by The Shift Project, a Paris-based think-tank, digital technologies outpaced even the aviation industry as far as carbon emissions are concerned. While aviation’s contribution to global carbon dioxide emission is estimated at about 2.5 per cent, nearly 4 per cent of carbon dioxide is generated by global data transfer and the accompanying infrastructure. In 2025 this may reach even 8 per cent.

Sending emails, WhatsApp calls or watching YouTube clips are only a fraction of everyday digital life of almost every human. However, online traffic all over the world may be hugely contributing to climate change.

“One search in Google generates as much carbon dioxide as, for instance, boiling water in an electric kettle. These may be small amounts, but once you multiply them by the number of all the internet users, i.e. about 2.5 billion people, we get gigantic figures. This has a significant impact on the natural environment,” assesses Marcin Zmaczyński.

Uploading videos online, in particular, requires large amounts of data. In 2018 online video traffic accounted for 300 million tonnes of carbon dioxide, which is more or less equivalent to the annual output generated by Spain. The higher the clip’s resolution, the more data need to be transferred. According to The Shift Project, ten hours of high-res video accounts for more bites of data than all the English entries in Wikipedia combined. A shift towards higher resolutions (e.g. 8K) will increase the emission even further.

“Video streaming generates the most carbon dioxide. Each year the quality of the files we watch becomes better and better. We very often watch them in 4K or Ultra HD resolutions. These are huge amounts of data, which is converted, and the tendency will only be growing as we consume more and more video content than written online text,” reminds the expert.

As the expert points out, we should use the internet reasonably. This does not mean we must completely give up the blessings of the digital world, but we should take up a rational approach towards the infrastructure by, for instance, deinstalling applications used for killing time rather than something we genuinely need. The growing demand for data volumes also means we are going to pay higher electricity bills. This is particularly important to businesses, first of all, in the context of the deregulation of power prices

“According to the study of Pike Research, shifting of infrastructure to the digital cloud may generate savings of up to 38 per cent,” stresses Zmaczyński.

Using a digital cloud may also be very ecological, but it is important where the datacentres take their energy from.

Eurostat informs that more than 26 per cent of businesses in the EU hiring at least 10 employees use cloud services. In Poland it is only 11.5 per cent, while, for comparison, in Finland – 65 per cent. 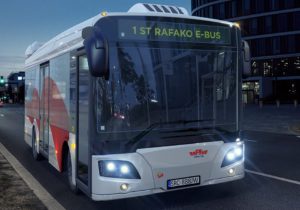