Poland is lagging far behind the EU states on the amount of power generated by renewable sources. EU average is now 17 per cent, but the community has set itself an objective of generating 20 per cent of energy from renewable sources by 2020.

In Poland the share of electric power from renewable energy sources in 2016 totalled 11.3 per cent, with the target of 15 per cent by 2020I)http://ec.europa.eu/eurostat/tgm/table.do?tab=table&init=1&language=en&pcode=t2020_31&plugin=1. Dynamic growth is noticeable. In 2007 this value was 6.9 per cent and reached 10.3 per cent in 2011. Because of the local climate, renewable sources with the best prospects in Poland are biomass and wind power.

Poland is a country with a big potential for biomass energy development. With its vast forest areas and relatively low-quality soils, producing energy raw materials from agriculture and forestry may seem a very good path for development.

What is particularly important in this context is the role of local biomass-based installations such as heating plants and small power and heating plants. Another important factor is support for the biomass trading market, as is the case today in Lithuania, where – thanks to the Baltpool platform – about 60 per cent of heat energy is generated by biomass.

A weakness of biomass is its local nature – transport of fuel requires high spending, which significantly reduces the effectiveness of such a source. Therefore, though the source itself is clean and renewable, transport of this raw material is not economically viable.

Poland also has a great potential for developing wind energy. Wind farms at the Baltic coast have particularly good conditions for operation. According to the Polish Wind Energy Association (PSEW) Poland’s coast has an energy potential of 6 thousand megawatts.

With its weather specificity Poland is not very likely to expand its solar energy potential. However, this is an energy source that may fairly easily be used by individual households for their own needs. Poles are now interested in upgrading their home power installations mainly for water heating purposes. Poland is now the fourth market of solar panels in the European Union.

Individual users also have potential for the development of small photovoltaic sources, generating electric power directly from sunlight. Prosumer energy is becoming a more and more popular trend where the user is both a producer and consumer of energy. Home power installations, together with distributed energy, constitute an interesting direction for the development of Poland’s power policy.

Nevertheless, Poland does not have great possibilities to develop geothermal energy mainly because of narrow resources, access to which is difficult and costly, due to the depth of the sources, for instance.

As a result, the Polish renewable energy may be founded on two solid pillars – biomass and wind, which may further be supported by solar power. 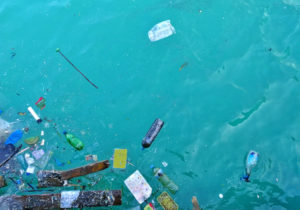 Plastic in oceans – it’s worse than we thought